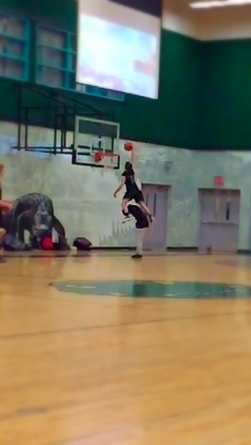 On Tuesday November 22, the main gym was packed with WGSS students eager to watch some basketball. However, this wasn’t a basketball tournament where Walnut Grove teams battle against rival schools in the main gym at lunch so students can watch. This event was held during flex in the main gym and featured a three point shooting contest and a dunk contest.

Frew was up first and hit 16 out of 25 shots, and so did Sturn creating a tie. Tavia Rowell was up after and came just short of the number of shots needed to go to the final. The last shooter was her older brother Ty Rowell who hit 18 out of 25 shots! With only two competitors allowed to move on to the final Frew and Sturn took to a best of five; it was close, but Sturn was victorious.

Ty Rowell and Dannon Sturn matched each other shot for shot for what seemed like an eternity. Friends were on the edge of their seats, students had hands covering their eyes, and the entire gym held its breath imbetween smiles of astonishment. It seemed like they would have to call it a draw, until a missed shot from Rowell provoked an opportunity for Sturn to hit the winning shot, and he did!

” At first, I was a little nervous, but then once we started going shot for shot it was more fun… it could have gone either way.”  – Dannon Sturn

The dunk contest was held after the three point shooting contest and proved to be as, if not more exciting. The contestants who didn’t make it to the final still had some crowd-pleasing moves. Brett Christensen even wore a GoPro while performing his dunks! With his final dunk of the competition, Jake Cowley jumped over fellow teammate Luke Chalk while dunking not one, but two basketballs earning him the first ten of the competition, and his last score. The final two competitors were Andrew Goertzen and James Woods. Goertzen wowed the crowd with his amazing dunks, but it was Woods who blew everybody away. Woods, the shortest competitor, seemed to defy gravity when he dunked over Ty Rowell  who was sitting in a chair, and again when he did a through the legs in the air and then slammed the ball home.

So there you have it, Dannon Sturn and James Woods were the winners of this year’s basketball competition. Hopefully, we’ll see those shots and dunks in this season’s games.