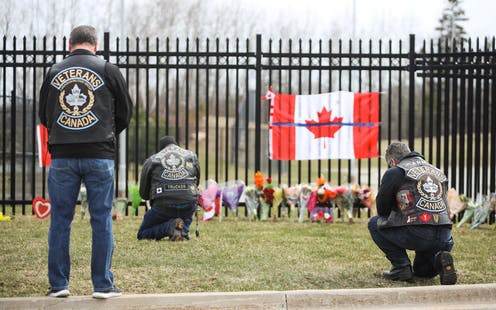 *Disclaimer* The content of this article may be upsetting to some readers. Discretion is advised.

On Saturday, April 18th, 2020, and into Sunday morning, tragedy hit Nova Scotia, Canada. A mass shooting that all started in Portapique: a small town with a population of 100 people, no sidewalks, and no streetlights. It is believed by investigators that Gabriel Wortman, a denturist with a clinic outside Halifax, was attending a party with his girlfriend in the Portapique area. Wortman began arguing with his girlfriend at the party; it is believed that their argument escalated once they arrived at his cottage. Wortman physically abused her and restrained her. Wortman’s girlfriend was able to escape and she hid in the woods near their home. During this time, Wortman returned to the party they had been at with a gun and began shooting at the partygoers at roughly 10:30pm that night. He killed several people there and then left the scene.After the police were notified of the assault, they set up a perimeter surrounding the area. Multiple houses in the area were on fire and the police discovered multiple casualties.

Wortman’s girlfriend was found in the woods at 6am the following morning after she was able to call 911. However Wortman’s home had been burned to the ground when they found her and the RCMP had suspected he may have committed suicude in the fire. They were told by witnesses that Wortman had three fake RCMP cruisers and they found them all: two in Portapique and one at his home in Halifax.

Sunday morning, a journalist was driving in to work when he saw a police car driving at a very high rate of speed in the opposite direction from him. He reported this information to the police. It wasn’t until Wortman’s girlfriend had been discovered by the police that she was able to confirm he had a 4th fake police cruiser in his possession. Believing they had all of Wortman’s police cruisers already, the RCMP was not able to notify the public until early Sunday morning that there was an active shooter in the area who was impersonating an officer.

Soon after this information surfaced, the RCMP received calls that there was a shooter in Wentworth, over 50km away from Portapique. Wortman is suspected of killing Alana Jenkins, her partner Sean McLeod, and their neighbor Tom Bagley. Following, Wortman then went to a friend’s house where he lived with his wife but they refused to let Wortman enter their home when they saw he was carrying a long gun. They called the police. David Matthew reported hearing a shot go off at around 9am which is what investigators believe to be Matthew’s neighbor Lillian Hyslop being murdered.

“I’ve been a police officer for more than 30 years now, and I can’t imagine a more horrific set of circumstances than trying to search for someone who looks like you,” says Superintendent Darren Campbell.

A witness reported an RCMP officer pull over a vehicle and shoot the driver, along with the driver of a car passing by. These victims were Heather O’Brien and the pregnant Kristen Beaton who were both frontline healthcare workers. Soon after, Wortman began firing at Const. Chad Morrison, an RCMP officer who was able to get away injured. Then, Wortman purposely crashed head first into Const. Hedi Stevenson’s RCMP cruiser. He then shot and killed her stealing the handgun she was carrying, and set both of their cars on fire. Joey Webber witnessed the car crash and stopped to help. Wortman shot him and stole his silver SUV.

Wortman was then spotted by a member of the RCMP’s Emergency Response Team who was joined by an RCMP K9 officer at a gas station in Enfield, Nova Scotia. After realizing he had been recognized, Wortman reached for his gun. However, the RCMP ERT officer was highly trained and shot Wortman before he could fire on the police. The RCMP investigation is still ongoing. They were able to confirm that at least 22 people were killed but they are unsure if any of the victims were planned or if Wortman knew them all. This tragedy has hit the small towns of Nova Scotia very deeply. These communities that were already struggling to cope with the coronavirus outbreak are now even more devastated. This is being considered Canada’s deadliest mass shootings and occured over a 12 hour time frame.

As stated by Canadian Prime Minister, Justin Trudeau, a plan to ban assault style firearms was ready to enact months ago, however has been held up due to the global pandemic of COVID-19. However, in light of the tragedy that hit Nova Scotia, Canada has finally announced the ban of some 1,500 makes and models of assault style weapons. This new law is effective immediately which means gun owners will no longer be able to sell, transport, import or use these weapons.

“As of today, the market for assault weapons in Canada is closed,” Public Safety Minister Bill Blair said. “Enough is enough. Banning these firearms will save Canadian lives.”

There will be a two year window where gun owners who already own these firearms can dispose of them and receive “fair compensation”.

After the horrifying events in Nova Scotia, it is comforting to know that appropriate action is being taken to ensure these atrocities will not happen again in Canadian communities.

This author has not added a biography. Meanwhile Karissa Ketter has contributed 7 posts. Click here to view them.