Diversity Week: A Journey Through Acceptance and Celebration

Gator Nation is home to varying backgrounds and opinions, which we embrace what makes WGSS a great place to be.

Weird History That I Find Fascinating:

From the beginning, Canada has been an immigrant nation. With aboriginal tribes migrating to North America over 10,000 years ago via the Bering Land Bridge, they developed a culture that isolated them from the rest of the world. When the European merchants looked for a trade route to Asia, they landed in the Caribbean. This newly discovered area was coined the “New World”, with European powers vying for colonies in the Americas.

Western items from French and English were exchanged for fur coats from the First Nations. Female aboriginals even married some merchants and became translators between languages. This mutual respect and cultural exchange would not last, however. With European powers seeking to profit off of furs, wars were fought, and treaties were signed which sidelined aboriginals from their land.

When the Seven Years War was fought, French culture and the Catholic faith were to be respected by the English. Later leading to the Confederation of Canada and, everyone understood that the uniting of provinces meant a marriage between English and French values.

Chinese culture was introduced as far back as 1858, with Chinese gold seekers arriving on Vancouver Island and the Fraser Valley. This influx increased with the construction of the Pacific Railway, where many Chinese workers were hired to build dangerous sections of the railway. Once the railway was built, immigration to Canada from Asia was clamped down, with a Head-Tax imposed on Chinese immigrants.

This policy of only allowing mostly white immigrants to come to Canada remained until 1971 when Pierre Trudeau signed into law the Multiculturalism Act which changed the policy of race-based immigration to merit-based immigration.

It is thanks to the multicultural law, that Canada was able to finally embrace anyone from across the globe, allowing for cultural exchange to freely happen. Diversity Week’s mission is precisely this. Allowing culture, thoughts, and opinions to be shared. To embrace and celebrate our differences. Because together, we form a mosaic, where everyone brings something to the table, where a person only enriches this country that we all proudly call home

The fight for inclusion and acceptance still carry on to this day. As marginalized groups push for acceptance and respect we must recognize that diversity means that we are better together rather than segregated and resentful.

Recent spikes in anti-Asian hate crimes have skyrocketed. Previously seen as model minorities, Asians are now shunned and berated to “go back to China”. Particularly in Vancouver, resentment over the coronavirus pandemic have led to drops in Asian-owned business’ revenue, forcing many to close permanently. As a person of colour, symbolism does matter alongside legislative action. Making it easier for prosecutors to charge suspects with the label of “hate crime” rather than “assault” would go a long way to making minorities feel safer – knowing that racially motivated attacks would not just be considered assault, but a crime fueled by racism.

What WGSS is Doing This Week: 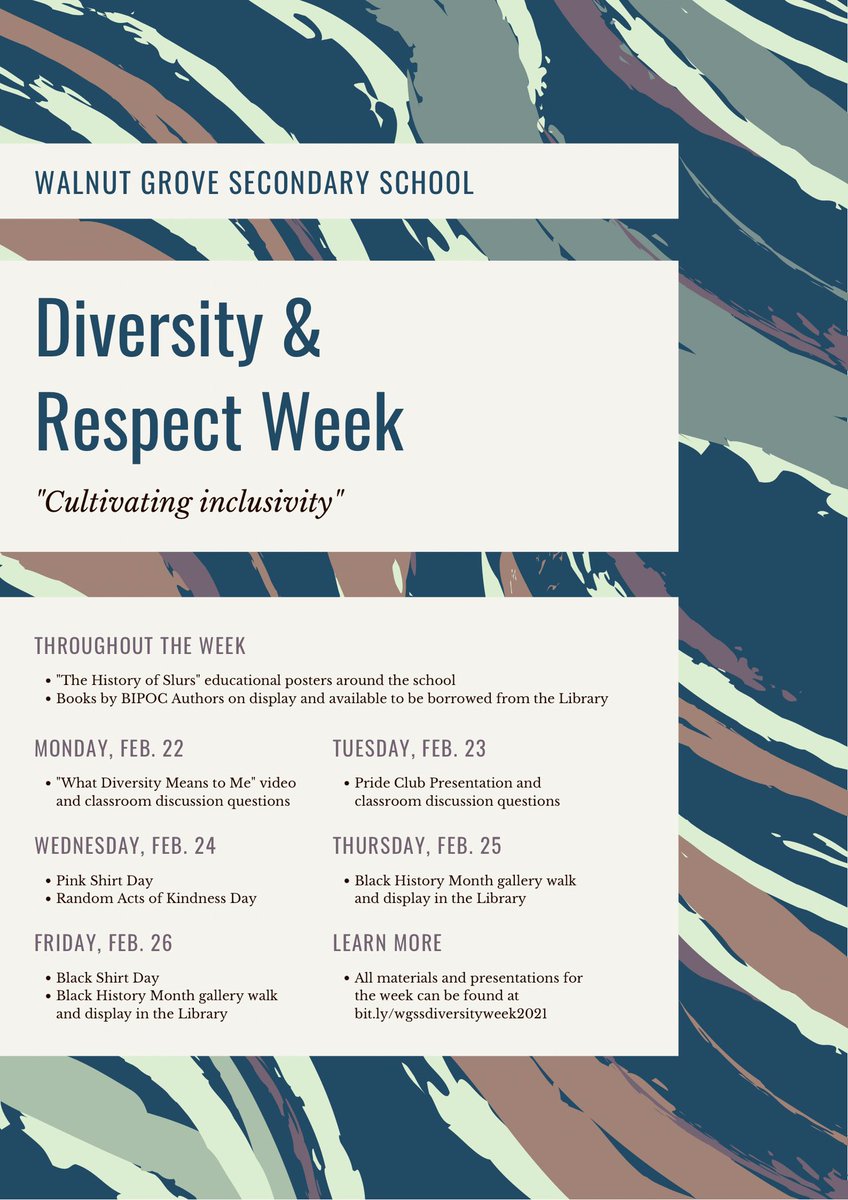 At WGSS Student Council, the Humanitarian Club, Pride Club, and Diversity Club have come together to plan pandemic-friendly events that highlight our diversity. The main attraction will be a gallery walk in honour of Black History Month.

Pride Club, also is planning on releasing a presentation to social studies teachers on Misconceptions About the LGBTQ+ Community. The presentation will include basic definitions of language used when discussing LGBTQ issues as well as a fairly extensive resources section.

In addition to the gallery walk, Student Council is filming a video with students about diversity.

I look forward to seeing what gets put forward!

As a proud gator, I am ecstatic to see the gallery walk and watch the diversity video. Learning more about each other’s background only seeks to enrich us, not drag us down.

Have a good Diversity Week and ponder what diversity means to you, your peers, and your community.

Diversity club is one of the newer clubs at school. The goal is to create a safe environment for students to come and share their different cultures, experiences, and opinions. Join us every other Monday at 4:15 on zoom. Zoom details are on our Instagram page so make sure to follow us @wgssdiversity! Embrace it, share it, celebrate it.

Opinion: Does the Quarter System Work?