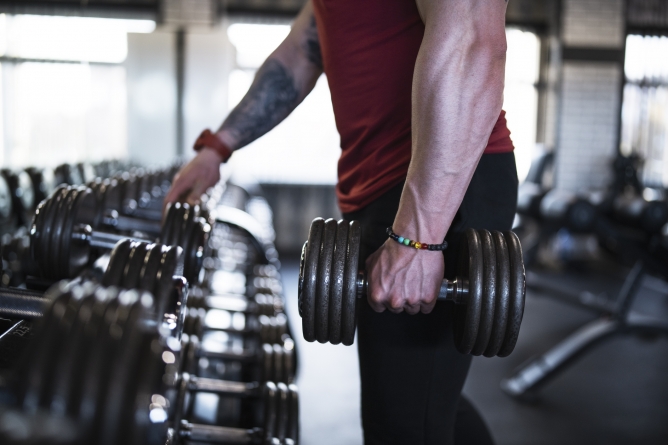 Steven Wilson sat across the gym office from me. He had just finished teaching a class in ‘The Space’ (WGSS’ weight room), and was still in his workout clothing. Mr. Wilson’s sturdy build and close-shaven hair may present an intimidating aura to those not familiar with him, however, upon spending any time talking with him this energy fades quickly. Beneath that exterior is a teacher who does everything in his power to bring out the best in his students. Anyone who has been in Mr. Wilson’s class knows how challenging it is. Be it a Tabata circuit or a free lifting day, he’s going to make sure that by the end of it, you have given everything you had. While this may be an intimidating prospect, its positive effect on mental and physical health is more than enough for a reward. On the subject, Wilson says that if you can “open [a student’s] heart up…[they] can come into the door and understand that discomfort is not a bad thing”.

This ties into Mr. Wilson’s holistic approach to teaching. Mr. Wilson defines his ideal teacher/class relationship as one where he can “help [a student] find their way to where their resolve is… because of the relationship [they] have [with him]”.  He says that “what helps [students] ‘buy into’ [him] is that [he] is willing to buy into them”. Wilson bases his mentor/pupil dynamic off of mutual respect, and a belief in those who he’s teaching.

In my experience, this isn’t just talk. Last year, I had Wilson for Senior Strength and Conditioning. In my entire time being in his class, I never felt like I was stranded in an ocean of tough workouts. On almost every Tabata, Wilson was right next to us “moving the dirt” as he would say. Working with a teacher who was willing to put in just as much work as they expected from me was an incredible way to form a bond. In The Space teacher and student are equalized, and in that equality, there is a trust that each party will give their best in each workout.

With all that being said, there is no denying that Wilson runs a challenging class. Spanning the gamut of what’s possible in a strength room, there is no shortage of sweat left behind in The Space. While this can be intimidating for those who aren’t predisposed to fitness, the bonds formed in The Space overcome said fears. I’d wager that while many times students have come into class dreading a Tabata, never once have they felt like they were suffering through it alone.

These aspects of his approach to fitness and education culminate in one of his mottos: “Ride or Die”. In Mr. Wilson’s own words, it means “[pushing] your chips in”; it means committing to doing something regardless of the outcome. His philosophy behind this is that “if it goes badly you know you did what you could and if it goes well you took a chance and you won”. Now those are words to live by.

Hey y'all, my name's Ian and I'm a writer for GNN, and an aspiring journalist! In the future I'd like to write about conflict and civil unrest around the world, but while I'm at GNN you can catch me writing about anything ranging from music to in-school events! Outside of writing I'm very passionate about music and fitness.