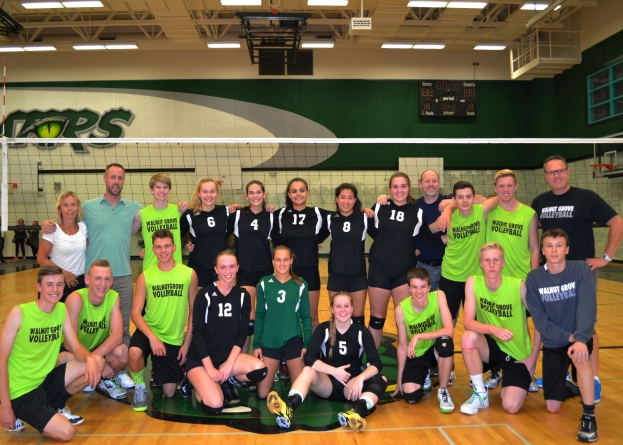 The senior girls volleyball team had its first home game on Wednesday, September 28th. The main gym was packed with eager fans cheering on their home team as they played against rival school, R.E Mountain. The atmosphere in the gym was so energetic and enthusiastic as Gator Nation cheered on their school team.

The first third started with RE Mountain leading at the beginning, but the Gators quickly closed the gap with great offence and defensive blocks resulting in the other team calling a time-out. The break in the game did nothing to slow down the Gator girls’ momentum as they doubled Mountain’s points for the rest of the game creating a 25-13 win. The second and third part of the game had just as many ups and downs with great serving and spikes from both teams. The girls worked hard, with every member of the team contributing to their success. Nevertheless, Walnut Grove couldn’t be held back and won all three sets making the crowd go wild. It was the perfect home game to start their season: which proves to look promising.

” We won our game, we are bonding as a team and it was the biggest show we’ve ever gotten!” – Sammy Lundquist, Sr. Girls’ Volleyball Player

If you weren’t at the home game on Wednesday, make sure to show your Gator spirit and come out and support your senior girls volleyball team next time!