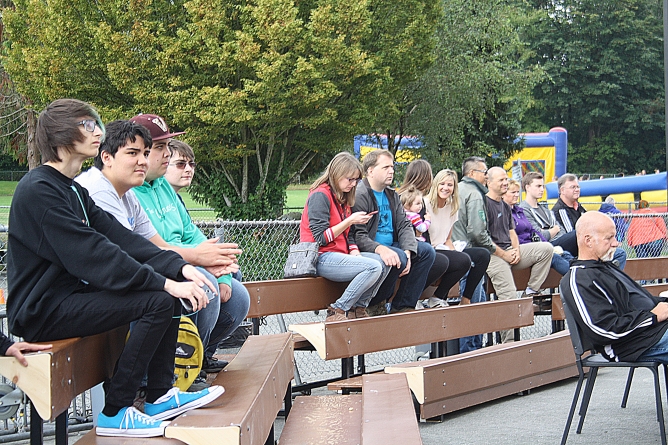 September 9, 2016 marks the official 25th anniversary of Walnut Grove Secondary. The school dated all the way back to 1991. It definitely has changed since then; improvements were made and more students and staff joined the community. On Saturday Sept. 24, we celebrated the anniversary of the school with music, food, and games. All students and staff, old and new, along with the families in the community, were able to have fun. Different music and performances were showcased at the anniversary. There was a large portable stage with giant speakers at the back of the school to enable the whole school to hear the music that was being played for them. Musical performances ranging from a professional DJ to the last year’s school musical were performed throughout the whole day.

Guitarists Juhwan Kim, Matt Lee and David Na, all students at WGSS, also performed during the day, taking the stage with their guitars and playing the most amazing tunes on them.

“I love playing the guitar, it just calms me down.”
David Na, Grade 11

“This was a great experience for me, and really kept the fire of guitar burning inside me.” Juhwan Kim, Grade 11

The tunes they played ranged from calm, slow music to fast and funky ones. With their contrasting playing styles, the songs definitely got the crowd’s attention and made it a very successful performance.

Near the middle of the day, some more music was performed by a group of WGSS alumni under the name of “Little India”. Consisting of a drummer, two electric guitarists and a bass guitarist. Surprisingly, they were never part of the music program at WGSS, which makes their talent super special. Their loud and heavy tunes allowed the energy from the music to be projected to the audience in front of them. They were definitely a big hit.

“It was great hearing them play a bunch of original songs and seeing them continue their passion to play music”
Mr. Fawkes, Music Arts Teacher.

It was definitely something completely different. Everyone at the 25th anniversary had fun. Not only was there good music throughout the day, but there was also tons of free food, basketball games with competing alumni and even a detailed walking tour of how the school was in the past! It was definitely a day that will be special to the school. Happy Birthday, Gators!