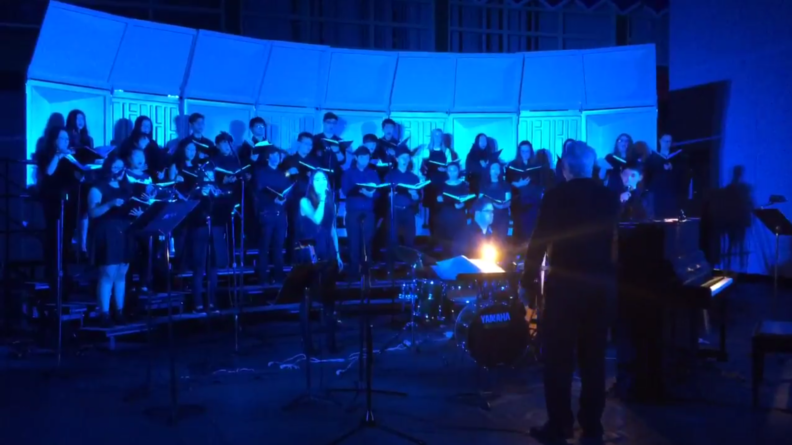 What’s a better way to get ready for Spring Break at WGSS than to sit back and listen to WGSS’ very own choirs perform pop music? Whether you’re into the classic 1900’s pop music or into the newer 21st-century pop genre, the choir had two mesmerizing choral performances ready for the last week of school before spring break. The first choral event was on March 7, where people set up half the gym with lights and mics in order to make a stage for their Pop Concert. This was the main event of the week regarding the choral events, and it was prepared for numerous people who have bought tickets to reserve their seats to watch and listen to all the choral groups perform.

Many popular pops tunes were performed: such as Bohemian Rhapsody (Queen), Skyfall (Adele) and even Radioactive (Imagine Dragons). But on top of that were a few older pop tunes! Some oldies-but-goldies that were sung included When I Fall In Love (Doris Day) and Sweet Caroline (Neil Diamond).  The variety of pop tunes performed at the concert was a huge success! The choir even got a brass section, a rhythm section, and even a beatboxer prepared for the evening to accompany them while they were performing!

“I really enjoyed the implementation of things other than vocals, like the instruments and stuff like that.” ~Joseph Lee, Special Beatboxer & Bass Section Singer

Of course,  Mr. Angell and the choral groups had more planned than just the Pop Concert on Tuesday night. So on the last

day before school ended, they prepared the library with a  set-up stage and a few mics to feature a few of the songs that they sang during the Pops Concert. Since the room was much smaller and had limited space, the Pop Concert event in “The Grove”  turned into a mini-concert. Even with its smaller size, the seats in the audience section were packed full with students and staff members waiting to hear what was in store for them. There were roughly 240 audience members in attendance. After the choir sang their hearts out to the same tunes they had performed just days before, the bell rang: marking the end of the last lunch time of the month before spring break.  Fortunately, everyone enjoyed the mini-concert, just as much as they enjoyed the Pop Concert, which contributed to the grand success of the music department this week as a whole.

“Overall, I was proud of our performances and proud of how well the choir members work together.” ~Josafat Portillo, Choir Soloist

Special thanks to Mr. Angell for organizing and taking charge of both events this week. Without him, the choral groups would not have been able to perform as well as they did that week, nor would the performances have been possible. In addition to that, other special thanks to Anneke Cairnie, Brandon Mills, Sydney Edwards and Ricardo Galvez as our riveting brass section, as well as Annika Wilson, Olivia Kozlovic and Maddie Sides as our fantastic strings section. WGSS’ choral is especially grateful for Mr. Fawkes, Mr. Trattle, and even the manager of Long and McQuade, Kyle Radomski, for being an extraordinary rhythm section. Lastly, a special appreciation to David Witzke

“It was amazing to see the positive reaction of the audience. I was quite surprised with how much interest there was for this year’s Pop Concert in The Grove. I look forward to making this a WGSS tradition.” ~Mr. Angell, Choir Instructor

Have a sensational spring break Gators!  We look forward to seeing you again after the two weeks.